This article was originally featured on The Truth About Guns, read the full article HERE.

It’s no secret: The Lone Star State is the world leader in high fence hunting. Since the 1930’s, Texas ranches have stocked exotic animals for hunters who couldn’t or wouldn’t make the trip to Africa and other distant climes to claim their prize. While that controversial practice continues to this day, deer are now the Texas high fence hunting industry’s mainstay. That’s been controversial too, stretching back to 1985.

That’s when the Texas legislature decreed that landowners could set aside up to 320 acres to improve deer breeds with stud stock. Unlike wild whitetails, the resulting offspring are the breeder’s property. The animals aren’t regulated by state law. They can be bred for size and taste. And fenced. And shot by paying customers.

“Deer ranching” is now a multi-million dollar business. Back in 2002, Texas Monthly reported that “at least 3 million of the 16 million acres of deer habitat in South Texas are now high-fenced.” As the article pointed out, high fence deer hunting raises concerns about the spread of infectious diseases and the privatization of a natural resource. But the main objection remains cultural. Many hunters (and non-hunters) object to the idea that high fence deer can’t escape predation. They claim these “canned hunts” don’t allow “fair chase,” their ultimate definition of “real hunting.” Despite the enormous size of many high fence ranches — there are ten thousand acre-plus examples — Boone & Crockett will not record scores of deer harvested within high fences.

At the same time, many hunters are deeply offended that the most primal activity known to man is being practiced by millennials who expect — and receive — instant gratification. Wearing designer gear, camo-clad hipsters walk fifty yards to a wooden blind to shoot a monster buck lingering by an automatic feeder. The ranch transports, cleans and dresses the dead deer, then presents the meat to customers in freezer-friendly packaging. 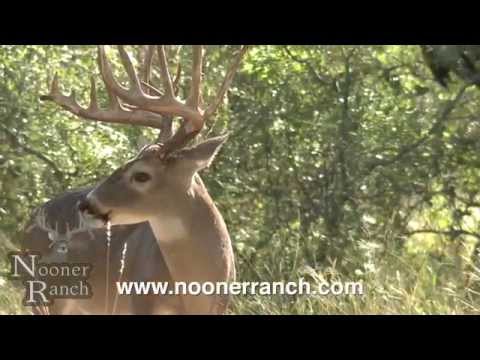 Texas ranches catering to this demographic make serious money; Ox Ranch in Uvalde charges $30K to take the largest Whitetail buck, plus $1,000 for a Weekday Hunting Package. As you’d expect, the upscale ranches roll out the red carpet for the high-rollers. They’re five-star luxury all the way, from air conditioned bedrooms to a personal chef and (or course) a fully-stocked bar.

I recently had the opportunity to hunt with Patrick Tarlton from the Texas Deer Association, a non-profit advocate for high fencing, on Nooner Ranch (video above). During our trip Patrick educated me on the benefits of high fencing deer. I believe that there’s nothing wrong with people wanting to hunt in a three-day span with a guarantee they’ll leave with a trophy. A lot of people don’t have the time, money or skill to hunt in the wild for days at a time; those of us who do often walk away empty-handed. High fence deer hunting satisfies a demand in the marketplace, like it or not.

But you should like it. High fence deer hunting improves the deer’s quality of life, protects and preserves the natural environment, introduces consumers to the joys of hunting (such as it is) and gives ranchers the extra income they need to keep their land.